How do you review an app that refuses to work for you? I was quite excited this week to review iCinegraph, an iPhone App that simplifies the creation of cinemagraphs. However, if this was a car review it'd be the kind of review where the car under consideration is never able to start (do those reviews even exist?). The reviewer has the keys to the automobile, the interior lights come on, and perhaps there's air conditioning. But, the car itself? Unfortunately, it never moves on its own power.

To start from the beginning, I had already reviewed another cinemagraph creator, the $1.99 Kinotopic, when Edit on a Dime member Jack Welsch suggested using a free competitor, iCinegraph. 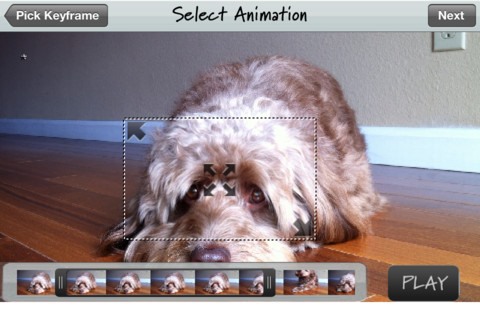 I downloaded iCinegraph from the iTunes Music Store and found the process of creating cinemagraphs with the app extremely similar to Kinotopic:

That's it. It couldn't be simpler. But there are problems. After using Kinotopic, I'm obviously spoiled by its 'painting' on technique for movement selection. iCinegraph uses a selection box instead, and my experience using it was frustrating. The box often seemed to maximize to 'full-screen' size on its own, had problems tracking my gestures, and was inaccurate compared to Kinotopic's brush. For a side by side example of Kinotopic and iCinegraph, examine the frame-grabs below. The first is Kinotopic, the second is iCinegraph.

As you can clearly see, Kinotopic offers a much more granular approach to isolating movement, upon which the success of a cinemagraph depends.

I wish I could say that iCinegraph makes up for its selection problems in other areas but I could never get the app to finish processing my videos. It repeatedly crashed, leaving me frustrated and disappointed.

I would say avoid iCinegraph at all costs, but the app is free. I'd suggest waiting a while for the app to become more stable. If you feel the urge to make cinemagraphs right away and don't want to go through the manual process, there's always Kintotopic.

Jett, I'm the developer behind iCinegraph. Version 1.1 of the app had memory issues on iPhone 4S that have been fixed in ver. 1.2 that came out Jan. 16th. Could you please take a look at the version you have installed? Thanks in advance.

Hi Yuri, thanks for stoping by and replying. I wrote the review several days ago, before version 1.2 came out. I've just updated it and am able to make cinemagraphs! I'll update the review to reflect the new version!

Hey, no sweat. I'm looking forward to your feedback and I'd love to let you know in advance of all the cool new features we have coming up. Can I contact you at thefilmtalk.com? Thanks and enjoy.

Well, I've been using iCinegraph, and I can say that it does *NOT* have any stabilization. This makes it nearly useless, because even propping my phone on a surface to take the video, even with the small resolution of the resulting image, there is still a perceptible shift in the animated area. For anything but a completely featureless border between the animated part and the still part, the border becomes the focus point, rather than the intended animation.

(See my MOST successful attempt out of a dozen tries: a co-worker shaking his head slightly: http://www.icinegraph.com/p/79 )

The app works, but with that limitation, I find it useless. (Half my tries had the camera change exposure during the video. Not by much, but enough that you watch the animated square brighten or dim noticeably over the course of the animation. If it had been the entire picture, it would have been unnoticeable, but again, it makes the break between the animated section and the still section just leap out.)